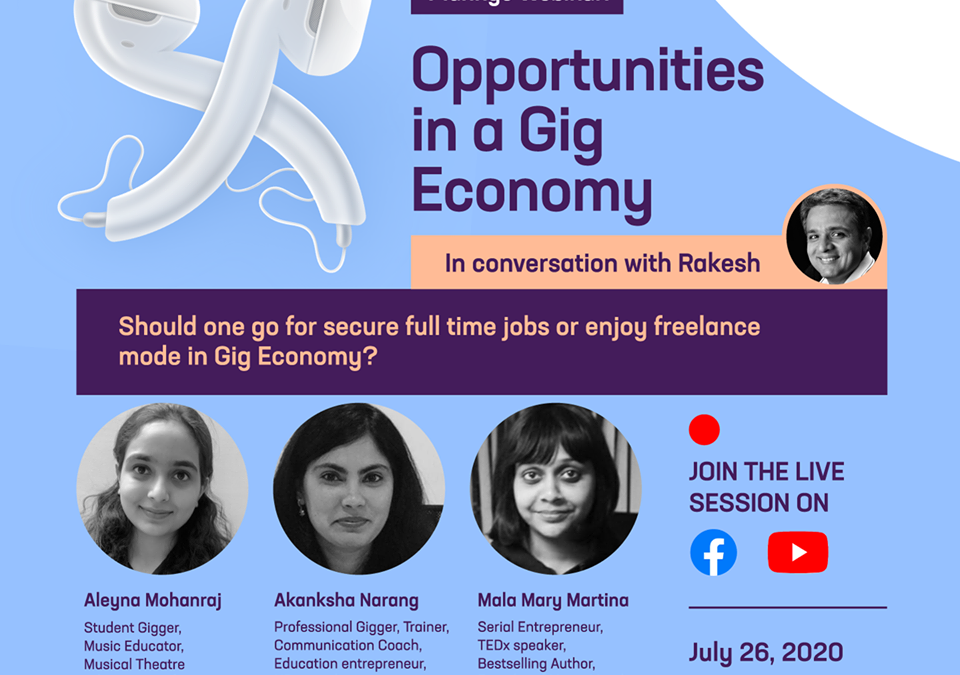 Opportunities in a Gig Economy

The pandemic has shown the world that no job is “secure”. In these unprecedented and rapidly changing times, it is essential to be aware of emerging trends. The gig economy is one such phenomenon that facilitates an idea or skill into a career. There is a wide range of positions that fall under gig economy, including full-time, part-time, and highly developed services. In conversation with our founder Rakesh Godhwani, Mala Mary Martina, Akanksha Narang and Aleyna Mohanraj take us through the intricacies of the gig economy and its rising popularity.

Mala is a serial entrepreneur and CEO of I Love Mondays, a company trying to help an entire generation choose careers they love and hopefully get into the gig economy. Akanksha Narang is a soft-skills trainer and a Neuro Linguistic Programming practitioner and runs a children’s library and activity centre called Unnati Library and Activity Centre, based in Bengaluru. Aleyna Mohanraj is a 19-year-old student of Musical Theatre. She is the first Indian to join the B.A.(Hons) Program at Trinity Laban Conservatoire of Music and Dance, London. She also completed her Grade 8 from ABRSM with distinction in 2019.

“Don’t put all your eggs in one basket” is a mantra that should apply to all our careers, says Mala. It is crucial to develop multiple skills and invest in numerous industries and areas, eventually reaping the benefits from all. The gig economy offers unlimited possibilities, she adds. For a ‘gigger’, it is vital to understand and develop essential knowledge of management and finance. It is also important for ‘non-giggers’ and future generations to empower themselves with these skills. Economic reasons also factor into the development of a gig economy. Often, employers cannot afford to hire full-time employees, instead hiring part-time or temporary workers to help out during busy times or on specific projects.

Insights from the speakers

Some points that Akanksha, Aleyna and Mala insisted enabled one to become a ‘gigger’ include:

Rakesh says one must figure out the right model and market oneself in the best possible manner, taking care not to overdo it. Akanksha adds that every ‘gigger’ is an entrepreneur.

Aleyna says that teenagers face significant amounts of pressure from society. If you know what you want to do, and are passionate about it, you will inevitably earn an income from it, she adds. She also says that parents must be willing to support and encourage their children in their journey. The greatest scientists were well-versed in some form of art, Albert Einstein being one of them. “It is imperative to balance the left and right sides of the brain,” adds Rakesh.

The Executive Program in Six Cs is SoME’s program for working professionals and executives. For more, WhatsApp us on 7676009639.

Watch other webinars hosted by Rakesh Godhwani on our YouTube channel. Register to get alerts about our webinars, or drop us an email on [email protected] with topic suggestions. Listen to our Plunnge Podcast. Join our Facebook community to stay connected and learn more about our activities.